The fact that we learn through observation has long been proven. In the context of small town development, this means that if we travel to another country or even another small town with our eyes open, we can learn from others beyond our boundaries. And if we get into conversation and exchange ideas, their approaches to sustaining their towns can be helpful in addressing our own challenges.

As part of the Carnegie UK Trust Twin Towns initiative, a total of 10 small towns in five ‘twin partnerships’ are pursuing precisely this approach: learning from each other.

The experiences of a small town partnership like the one between Wooler (County of Northumberland, England) and Broughshane (County Antrim, Northern Ireland) can help active members of the community to learn from external good practice and adapt this to their own local areas. During my ten-week research stay in Wooler – including a two-day visit to its partner town of Broughshane – I was able to follow this up first-hand and even actively contribute to the exchange process.

As with my PhD work, the Carnegie UK Trust is looking to identify the criteria for successful vibrant and dynamic small towns across the UK and Ireland. My findings from the Wooler and Broughshane twinning partnership relate to an important element of a rural community: its story, and how it is told. In this case, the results of an international Carnegie UK Trust study (see the common factors below) show that successful and vibrant small towns often have a shared narrative – a story – about the place. It tells locals (but also outsiders) how this small town has become a ‘unique place’, what it stands for at present, and, if possible, along what path it wants to develop in the future. The DNA of the small town, its sense of place, is declared publicly and demonstrated to the world. Over the course of 25 interviews with key players in and around Wooler, the lack of a story about the town was clearly highlighted by several interviewees: ‘Wooler and Glendale could do a much better job of selling themselves! We have great people here and even more beautiful surroundings. The villages on the coast would be so happy if they could unload some visitors on to us’. And ‘outstanding personalities from this region like the feminist Josephine Butler , ,the founding father of the welfare state, William H. Beveridge or the statesman Charles Gray (2nd Earl Gray) are not recognised sufficiently as being associated with the north of Northumberland – these were our people too!’.  In the context of a study on Wooler’s overall architectural appearance published at the beginning of the 2000s, a descriptive quote was made by a resident, which from my point of view splendidly summarizes the situation:

‘Wooler is essentially a working town … Unpretentious … but with an inherent sense of place’.

Without doubt, modesty is a wonderful trait of Northumbrians, in Glendale and Wooler, too. But, when it comes to showing the world that you have a lot to offer, modesty is not always the best policy. This is especially true for attracting tourists and visitors. Thanks to the Twin Towns initiative, an awareness of the need to communicate more professionally and to promote itself effectively has been raised significantly in Wooler, particularly following our visit to Broughshane – UK Village of the Year 2018. 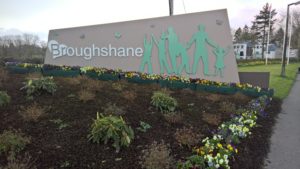 Main road entrance to Broughshane. Even in a cold early April they have flowers 🙂 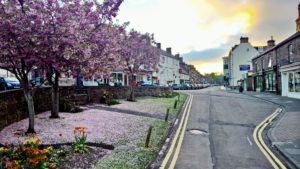 Just one example of Broughshane’s efforts to attract visitors is their project planting flowers extensively across the town – transforming it into a living garden show of national renown. The Wooler Parish Council and The Glendale Gateway Trust would like to replicate this in Wooler by installing flower planters along the access roads. Wooler has also taken inspiration from the modern look and user-friendly functionality of Broughshane’s online presence: the renewal of Wooler and Glendale’s website and online marketing have been initiated as a result of a digital strategy I had the pleasure to work on with the Trust staff during my internship. Finally, through the hard work of the Glendale Local History Society and the support of the Twin Towns initiative, an interactive town trail is taking shape, which brings to life the past and present of historic buildings and sites in the area. These are the activities and steps that a twinning initiative like Twin Towns can set in motion.

In Wooler, the idea is to work across various analogical and digital channels to ensure that their own ‘story’ can be broadcasted professionally to the world.

In my view, this mutual enrichment has been possible due to two truly proactive, self-effective communities and professional implementing bodies (Glendale Gateway Trust and Broughshane & District Community Association). Both were able to immediately weave sophisticated but realistic action plans from relatively modest funds in the Carnegie UK Trust’s partnership programme. I have to ask myself whether in less dynamic places the programme would have caught people’s imagination in this way and whether or not considerably more facilitation and external push would have been needed. All in all, I found the Carnegie UK Twin Towns initiative to be very worthy of support which certainly should be fostered more often, not only from the third sector but by government agencies. I am pleased to have been a small part of it and look forward to the time when the Carnegie UK Trust’s paths and mine will cross again.

Note: This article was written in collaboration with the funding body of the Twin Towns Initiative, the Carnegie UK Trust and is also available on their blog.